It feels strange, now, to look back at my first encounters with Catholicism…

I remember when I was a young teen, I was troubled by Jesus’ words, ‘If you wish to be perfect, go, sell your possessions, and give the money to the poor, and you will have treasure in heaven; then come, follow me.’ And the fact that no Christians I’d heard of had ever even tried to obey Him. Did no one wish to be perfect?

I did some research, and found the idea of “voluntary poverty” and the figure of St. Francis of Assisi, and I devoured his story from the Catholic Encyclopaedia. Finally, I had found someone who took the gospel seriously! He excited me a lot, and I spent a lot of time daydreaming about St. Francis and his companions, and whether I might imitate him.

Until then, I had been taught that the gospel was something done to me, that I really had very little part in. But Jesus in the gospels was teaching me something different. He taught me about the Kingdom, that made insane, outrageous, improper demands of me. His gospel was something I had to live for myself. It wasn’t merely internal, but actually, was a matter of turning me out of myself. St. Francis validated my understanding of the gospel as a Life for us to live out, and that was possible to actually live out.

I think this shifted my thinking, so that I began preferring a more Catholic idea of salvation as by some combination of faith and works, rather than the protestant “faith alone”. 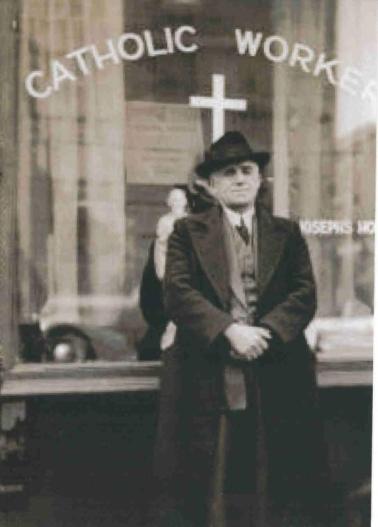 Once again, I was shocked and excited to find real people making the attempt to take Jesus at His word. I’d come across various radical protestant groups, anabaptists, mennonites, Dukhobors, etc, but they weren’t the same… As radical as they were, they couldn’t go all the way (I guess because they were larger, family based communities). The Catholic Workers lived the foolishness of the gospel, in God’s absurd love. They taught me the radical Catholic vision of humanity as genuinely children of God, as spelled out in the Church’s social teaching.

In reading their biographies, I glimpsed the world of Catholicism, full of saints and sacraments, and I began to envy them for it. Reading about how Jesus truly, physically fed them, and lived in them, in the Eucharist, and was also truly there to be served in the poor, made me realise the one weird thing that really separates Catholicism from protestantism: God’s extraordinary intimacy with us. And I wanted it to be true.

Mary being the Mother of God, the Church bearing God’s authority, salvation being by faith with works, the power of the saints, the real presence of the Eucharist, the effectiveness of Baptism, and all the rest, were the extraordinary ways that God lives in and amongst His people. These teachings became beautiful to me, even if I wasn’t yet convinced that they were true.

St. Francis of Assisi, Peter Maurin and Dorothy Day introduced me to Catholicism, and started me on my road to one day becoming a Catholic myself. They showed me a faith that was radical, exciting, and beautiful. And now, I look forward to thanking them each when we meet in heaven.