Jesus didn’t just defeat death in His own case only, making Himself a special exception to the laws of life and death. He crushed death itself, abolishing its reign and dominion. He annihilated death at a metaphysical level.

The whole world was held in death’s grip, and no one could hope to escape it. It was known that eventually, each and every man, woman and child would come to be cut off from the land of the living and go down to join the dead. Everyone knew that this is simply our fate.

But Jesus overcame both death and sin by uniting Himself to them. By becoming sin, identifying Himself perfectly with sinful humanity, and suffering death, He brought the fullness of love, and life, and righteousness down into the heart of sin and of death itself. He descended to the deepest existential depths of human misery and hopelessness, the darkness from which no one returns, and there He brought life to death and redemption to sin, utterly overcoming them from the inside.

As Christians we have already been baptised into Jesus’s death and resurrection. We have passed over from death to life already, and the grave will never hold us captive. Even after our bodily death, when we still await the resurrection of the body at the end of time, we will not be trapped in the grave, but alive in the spirit in Heaven.

The Logos destroys the tyranny of the evil one, who dominates us through deceit, by triumphantly using as a weapon against him the flesh defeated in Adam. In this way he shows that what was once captured and made subject to death now captures the captor: by a natural death it destroys the captor’s life and becomes a poison to him, making him vomit up all those he was able to swallow because he had the power of death. But to humankind it becomes life, like leaven in the dough impelling the whole of nature to rise like dough in the resurrection of life (cf 1 Cor. 5:6-7). It was to confer this life that the Logos who was God became man – a truly unheard of thing – and willingly accepted the death of the flesh.

-St Maximus the Confessor (On the Lord’s Prayer)

Recently, I realised I hadn’t properly forgiven some people. I wanted to, but couldn’t figure out how. I thought things like, “I forgive them, but they did still…” I realised that I didn’t really know what forgiveness was.

So I looked to the cross to learn, and there I saw that forgiveness means letting yourself be hurt. Jesus didn’t have to endure the cross, but He did, accepting every blow and every lash, rather than fighting the sinners attacking Him. All our sins are against Him, and so in choosing to suffer our sins, He was directly and immediately forgiving us.

So to forgive, we must allow ourselves to be wounded. Those we must forgive will be the ones who have wounded us, and are wounding us.

I think I had been thinking of forgiveness as being a matter of letting go, but now I think of it as accepting. I can’t just drop my pain, physical or otherwise, but if I accept it, if I say yes to the pain, then I’m free, and the pain, and whoever inflicted it, is no longer an enemy I can’t escape.

It feels pretty great. Unforgiveness creeps up again sometimes, but then I remember to accept the pain, and I’m free again.

And I think that that liberty is a small foretaste of the resurrection.

Easter reminds us of the essential truth, that Christianity is a weird cult centred on escaping death by means of death.

We believe that one historical man was so fully alive, that life burst forth wherever he went. And that He was so fully alive, because He was always ready and willing to give Himself/His life away. But Life will always have enemies, because it destroys the control that comes from death and violence. And so this man Who was Life itself, was brutally put to death. Yet even in His own death, He gave His life so freely, that He brought life to death itself, and in dying, was only made more alive.

And we, by accepting and living by the gift of His life, that gives itself freely even to death, may be united to Him, and live and die and rise again in Him.

Christians, when they realise what they are, are an uncontrollable people, who will live fully even if that means dying, and will even rejoice to “give” their lives.

That is the crazy religion we call Christianity.

The Resurrection should be understood as a challenge to the world. Death has been overcome, and now, the children of God have nothing left to fear.

And of course, a culture of death requires and creates for itself a culture of indifference. When we’re surrounded by so much death, the easiest way to deal with it is simply to die inside, closing our eyes and hearts. We package away the suffering in little boxes, which we’ll return to occasionally, to cry a little, give some money, and so relieve what’s left of our consciences a little bit. If we let our hearts open to all the misery and death around us, we’d be unable to let it go on. We would be compelled to stand against the forces of death that surround us.

But what use is it? Who can fight against the empire of death and win? Especially when death reigns even in our own hearts?

You cannot kill a Christian! We cannot die! God is on our side! God has justified the crucified! Nothing can ever overcome the children of God. Nothing can stop the Kingdom of God.

Therefore, we must live in a new manner. The dying things of the world no longer matter. Nothing matters, except the true life we have been given, the life of absolute love, the life of the children of God, the life of heaven.

Jesus is vindicated, and His way is proven right. And so we can accept Him, His love, His truth, in all His weakness. His death is only half the story.

And so we can and must walk in His ways, taking up our crosses, the pains and injustices around us, and entering them, transforming them, with a fearless love. Nothing, not even death, can stop the children of God, and that is what we are.

This is the freedom we must live out in the face of all the death surrounding us on every side. We must live in the victory already won.
God bless you! Christ is risen!

Just a thought that pleased me a good deal.

The Good News, of our liberation from death in all its forms, necessarily rejoices! There is no understanding of Christianity that is not ultimately a triumphant victory march. We parade around the city streets and occupy its squares, waving our flag and practising the freedom we declare to the world!

We are free, and we are bringing freedom. Life is ours, and no murderer can ever take it away.

Jesus of Nazareth has conquered death! By living fully and fearlessly, with no care for protecting or serving his finite self, His very death is life. He died giving us His life that conquers death.

To explain this without proclaiming it would be as absurd as trying to recreate a song without music. Indeed, who could say but not sing Alleluia? The word is sheer music! 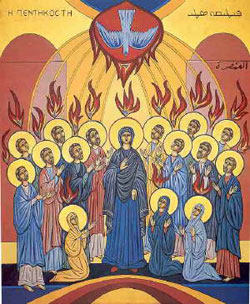 Pentecost: when we received the Spirit- God’s own Joy & Freedom

And all at once there was a violent earthquake, for the angel of the Lord, descending from heaven, came and rolled away the stone and sat on it. His face was like lightning, his robe white as snow. The guards were so shaken, so frightened of him, that they were like dead men. But the angel spoke; and he said to the women, ‘There is no need for you to be afraid. I know you are looking for Jesus, who was crucified. He is not here, for he has risen, as he said he would. Come and see the place where he lay, then go quickly and tell his disciples, “He has risen from the dead and now is going before you to Galilee; it is there you will see him”. Now I have told you.’ Filled with awe and great joy the women came quickly away from the tomb and ran to tell the disciples.
(Matthew 28:2-8)

Something I love in this passage, is how the angel completely ignores the armed guards to speak to these faithful women. I find it beyond wonderful that these representatives of the power of Rome and of the Sanhedrin are nothing to the angel.

I imagine the angel sitting on the stone with the biggest, most childish grin you have ever seen. He swings his legs for the fun of it, or has his legs crossed and leans forward over them in his eagerness. His every word seems like it is holding back, or perhaps just holding, a whole flood of laughter. He has no time and no care for these mortal men standing guard over death.

And notice how different their reactions are: the guards are so shaken, so frightened of him, that they are like dead men; the women on the other hand, are filled with awe and great joy, coming quickly away from the tomb and running to tell the disciples. The women are afraid in a completely different way.

What are they both afraid of? Life. Of course, no one likes death. But it is, well… comfortable. We know death, it’s predictable, it’s easy. But life! Life goes off in a million different directions according to its own whims! Life can’t be predicted or contained, except by death. And now even death has been conquered!

Jesus is a weed, breaking through the concrete of death

For the women, this means the hope of absolute life. It means the story of Jesus saving the world is only beginning. It means love is and always will be victorious.

For the guards, this means they are rendered powerless. They have failed to control a corpse! No amount of violence can ever defeat the freedom of the children of God!

God bless you and Alleluia!